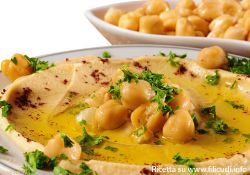 The hummus is a chickpea cream easy to prepare, delicious, of Middle Eastern origin widespread in Arab countries, with different variations from country to country and even from family to family.
The Sicily has been under Arab domination and has absorbed many Arab customs, traditions and words of the dialect.

The hummus is so widely used in Sicilian cuisine.
You can 'taste on bread, crackers or on sandwiches, as a condiment of appetizers. Generally at room temperature or cold.
ingredients

1 cup of chickpeas (a jar of 400g of chickpeas for the "fast" version summer).
2-3 tablespoons of olive oil mixed with 1 crushed garlic clove
1 or 2 tablespoons of tahini light, which is a tasty sesame cream.
the juice of a lemon
salt
parsley
curry, turmeric and cumin
preparation

If using dried chickpeas, you'll have to leave them to soak overnight in water (and bicarbonate to limit the side effects: ...). Rinse them the next day.

Put them in a pot and boil for a long time (inpentola pressure if you like and want to speed up cooking) until they become soft. remove any foam. Finally, drain and set aside for later.

If you are not purists and you settle for canned chickpeas you can skip this part and go after having them just drained. Laughing

In a large nonstick skillet, fry lightly in olive oil - preferably of Filicudi, like we do - two cloves of garlic along with the spices: a tablespoon or two of curry, a bit of turmeric, 1 tablespoon cumin. .. other spices according to your taste for tasty variations.

Add the chickpeas to the pan and let them cook for a few minutes.

Then pour the mixture in a blender along with the juice of one lemon or two (depending on your taste) that will balance the flavor by giving the right acidity.

A nice tour of the mixer, and you will get a cream-bodied, dense, tasty: the hummus.
Adjust the density of the cream with the olive oil.

Serve with fresh parsley, olive oil, or garnished with paprika or pepper.
I love it cold (refrigerator), on crackers, bread, sandwiches and salad as a side dish, side dish for first and second, on crostini or toasted bread!

You can also make hummus without tahini, it will have a different taste but always good.

Someone pointed out to me that the hummus is not a dish Filicudi. True. But it is a Sicilian dish, of Arab and mediterranean origin live as many wonders of our culture. We Sicilians, proud to have solid roots in the Arab world!