The "arancini" - Italian for "little oranges" - are one of the specialties of the traditional Sicilian cuisine.
They are not a tradition of filicudi but as the kind Sicilian I am I have to show you how to prepare them! 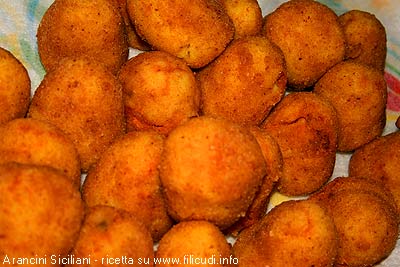 Rice (for rice, parboiled, of the type that does not overcook ...): 320 grams
Minced Beef: 100gr
peeled tomatoes: 250g
grated cheese: 60 gr
Eggs: 5
Saffron powder: 1 or 2 sachets, to taste.
Onion: 100gr
White wine: to taste
Extra virgin olive oil (I use what we do with our Filicudi olive trees, 300 liters per year of tasty superextra oil, absolute quality!): 3 tablespoons
Oil for frying: As needed
Salt and pepper: to taste.

.. And now ladies and gentlemen ... start preparing these delicacies!
Fry the onion in extra virgin olive oil until golden, then add the ground beef and let it flavor; pour a little white wine and let it evaporate.
Add the tomatoes, a pinch of salt and pepper according to your taste.
Continue to the very low heat for about 1 hour.
Meanwhile boil the rice (wash it first, until 'the water does not become white), drain it al dente and season with grated cheese, red eggs and saffron.

Flatten the rice on a plate and let cool slightly.
So with a large spoon put a bit of rice in a hand giving it the shape of a bowl; then pour a spoonful of sauce and cover with more rice.
Roll into balls and roll the oranges in white beaten egg and then in bread crumbs.
then let to rest for half an hour, after which fry them in a pan with very high walls (or a pot) with abundant oil.

Note: arancini are traditionally shaped as a "pear" if they are seasoned with sauce and meat. If they are rounded balls, they are  butter flavoured (butter, pepper, cheese) without sauce; the shape is ovoidal if they are stuffed with spinachs (often mixed in rice paste).

In Palermo they are called to the female, arancina.
In eastern Sicily, the name is masculine. Arancino.