Filicudi is the penultimate to the left of the seven islands of the Aeolian archipelago, which are located in the Tyrrhenian Sea north of Sicily.

The island extends for 9.5 km² or about 3,75mi² of which only a small part is inhabited. Filicudi is a volcanic island, its top part consists of the mount "Fossa Felci" which is 774 meters high above sea level and is, an inactive volcano.

The marvelous coasts are in some points overhanging the sea while in others the coast is characterized by flat beaches like the beach "delle punte" under Cape Graziano.
Imposing rocks of eruptive nature rise from the sea like stacks, the most famous of which "La Canna" is an inevitable destination of every tour of the island by sea.
There are also numerous caves, the most famous of which is the Bue Marino (literally "Marine Seal") cave, by a crystalline blue backdrop.

At one time the island was quite completely cultivated with great difficulty by its inhabitants, while today despite the progress of the technique it is no longer convenient to cultivate anything, being the majority of the earnings of the approximately 270 islanders deriving from tourism. However capers and figs, olives and vines are still cultivated, although in minor scale.

The coasts of Filicudi are a wonder of nature, and are worth the effort to be admired by even the most hurried tourist.
There are countless terraces built by man to snatch every meter of land from the island in order to dedicate it to agriculture. They alternate with slopes of typical Mediterranean vegetation, greener and more flourishing in the northern area of the island due to the lower sun exposure. The volcanic nature of the island offers a multitude of narrow valleys and majestic perpendicular cliffs, in which the alternation of multi-colored stratifications testifies to a tumultuous geological life. 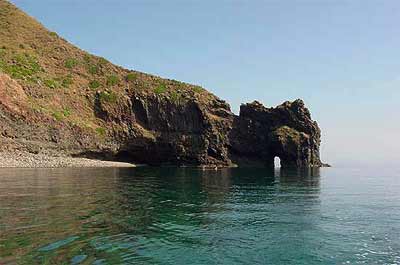 There are numerous inlets and bays, full of ravines where crystal clear water laps against the black lava rock that plunges into the sea and continues underwater creating winding paths and submarine valleys of rare beauty, which are also offered to the occasional diver without forcing him deep diving to admire the spectacle of nature and underwater life. 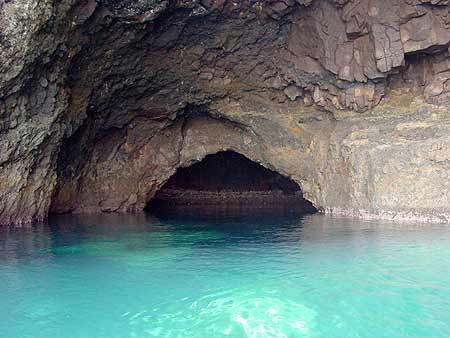 The volcanic nature and the erosion of atmospheric and marine agents has created breathtaking geological monuments, such as the Maccatore cave, the lava gate in the sea called "perciato" in Siccagni, and the famous Bue Marino cave (where he lived not too many decades ago a colony of sea lions). The atrium of the cave opens up a very large cavity, the backdrop is illuminated by sunlight which, reflected and refracted, creates crystalline games of bright blue light, which make the place a must for every tour of the island by boat. 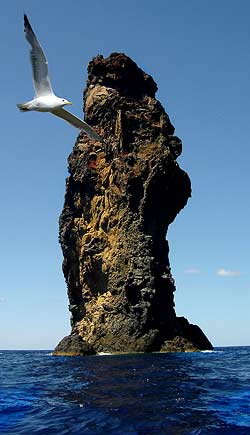 On the west of the island of Filicudi the rocks of Montenassari, Mitra, Notary and above all that of Canna emerge, about 74 meters high, surrounded exclusively by the sea, and natural habitat of an endemic lizard that lives only there and has evolved them independently.

On the north west of the island, very close to the coast, there is the rock called "the Giafante".
At that point the coast is very indented and full of wonderful coves and bays where you can swim.
The backdrop is low, clear and iridescent between green and blue. 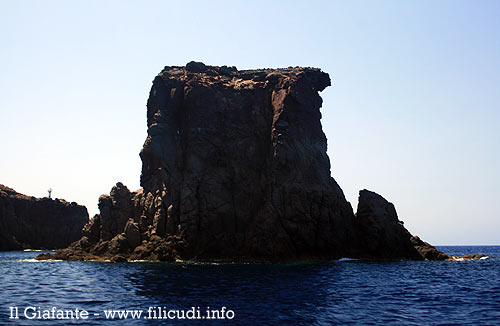 The west side of the island of Filicudi is vertically cut in two by the "Sciara", a steep tongue of volcanic sand and rock that plunges into the sea, now crossed by a few daring or some wild goat. 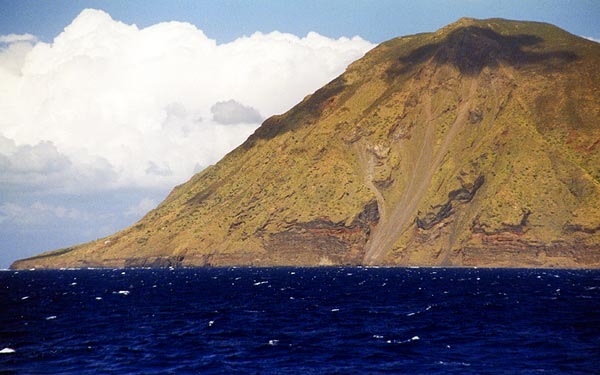 The typical vegetation of the Mediterranean scrub (lentisk, bracken, strawberry tree, gorse, arborea, heather, broom, caper, prickly pear and) has regained the dominion of the territory, once laboriously cultivated and now abandoned, rarely interrupted by some stains of arboreal essences (holm oak, downy oak and, in some more humid valleys, willow, ash and bagolaro). Near the still inhabited houses, other varieties (pine, bougainvillea, hibiscus), recently introduced, grow surrounded by the typical species of the mainland gardens.

Another attraction of Filicudi is the rock in the shape of a horse's head on the south side of the island, visible from the driveway that leads from the port towards pecorino in the only long straight stretch.
Here's the picture: 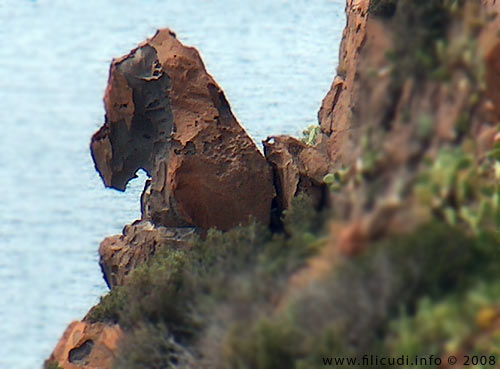 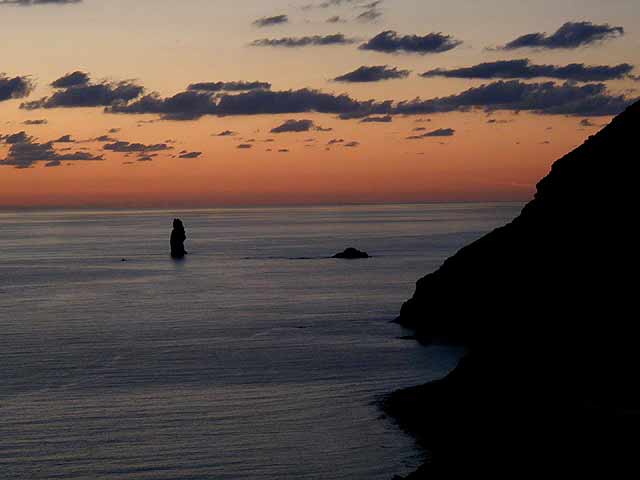 In Filicudi, from the paleontological point of view, the Capo Graziano peninsula in the southeast of the island is remarkable, as it is home to various and vast prehistoric settlements dating back mainly to the Neolithic and then to the Bronze Age.
A very large first inhabited area, of which only a few oval huts have been excavated so far, extends over the Piano del Porto on the southern coast of the isthmus that connects Montagnola to Capo Graziano in Filo Braccio and near the ruined Casa Lopez (can be attributed to the XVIII-XVII centuries BC).
Another larger settlement, dating back to the previous one, is located on the hill of Montagnola di Capo Graziano (It is indicated by tourist signs as "Prehistoric Village", and can be easily reached on foot from the port). 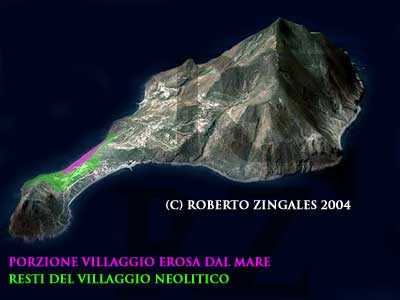 The excavations carried out in the 60s and 70s have found about twenty oval-shaped houses on the plateau at 100m above sea level.
The village probably also extended over the high plateaus above the Montagnola peak.
It is assumed that this first housing nucleus was moved to the Monte di Capo Graziano as the position is more easily defensible. 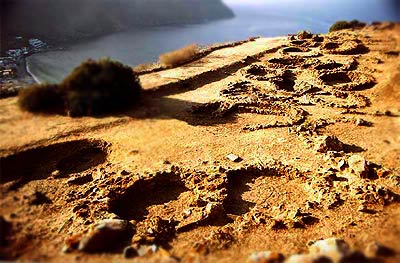 Along with indigenous pottery, numerous fragments of Mycenaean and Cycladic pottery were also found in the huts of the Montagnola, attesting commercial relations with the Aegean between 1500 and 1300 BC.
It is assumed that the village was violently destroyed in the 13th century BC.
Burials have been found on the steep slopes of the Capo Graziano mountain.

A boulder with a Greek inscription was found on the summit of "Montagnola" in Pecorini, that is, on the mountain that dominates the town of the same name, on the southwest coast of the island. 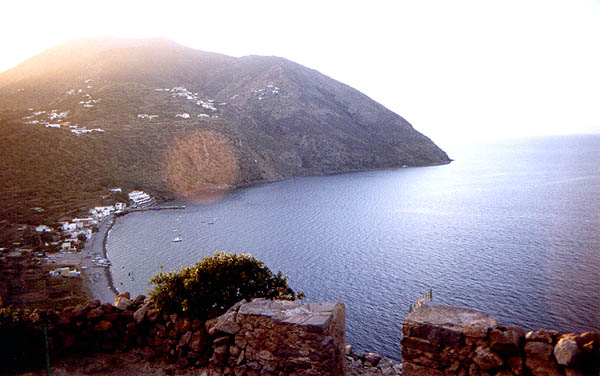 The signs of the classical age are reduced to traces of inhabited areas, to ceramics with black paint from the Greek era and sealed earth from the Roman age found in the Siccagni and Zucco Grande districts, to a large cistern and traces of Roman buildings identified on the Port Floor and , on the Montagnola di Pecorini, to a rock with an engraved Greek name. Marine archeology, in several more or less systematic research campaigns, has recovered, from at least nine different wrecks of shipwrecked ships at the insidious Cape Graziano, a Mycenaean amphorae of the fifteenth century BC, groups of amphorae differently datable from the fourth century B.C up to the late imperial age and bronze cannons from a warship from the 17th-18th century AD The material from the excavations and marine recoveries is exhibited at the Lipari Museum.

The Etna volcano and the nebrodi mountains seen by Filicudi

From Filicudi you can see the north coast of Sicily, the Nebrodi mountains, and the majestic Etna volcano.
Here is a photo of Etna seen from our houses in Filicudi, from the south side of the island. 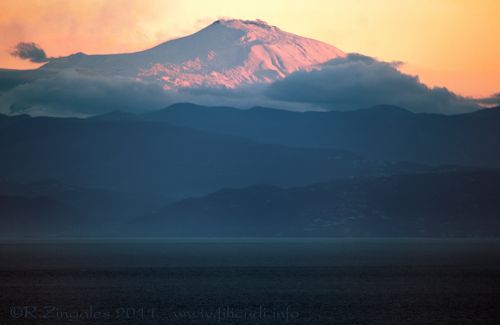 The night landscape is idyllic, and perfect for photographing the Milky Way.
The following photo is beautiful and full of stars, but live you will see thousands more, and you will clearly see (always with the naked eye) the Milky Way, which you probably have never seen in the city!
This photo was taken with an old canon eos 650D ... today outclassed by the sensitivity of the new digital cameras.
I assure you that as soon as your eye gets used to the darkness you will see the Milky Way in this way!

The lights at the bottom of the horizon are from Sicily. 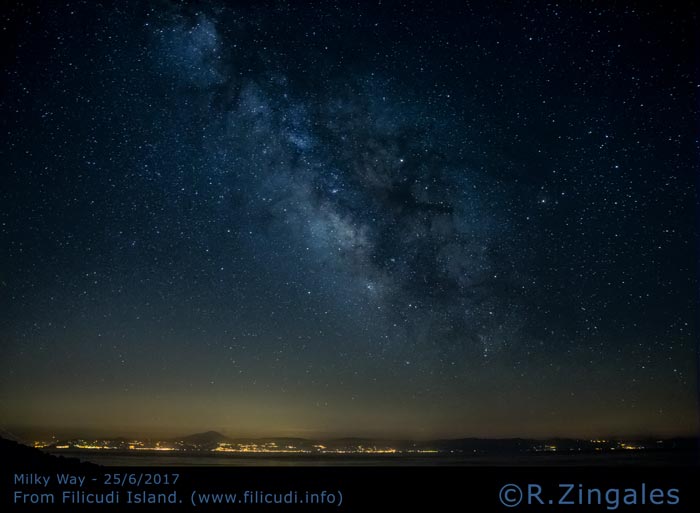